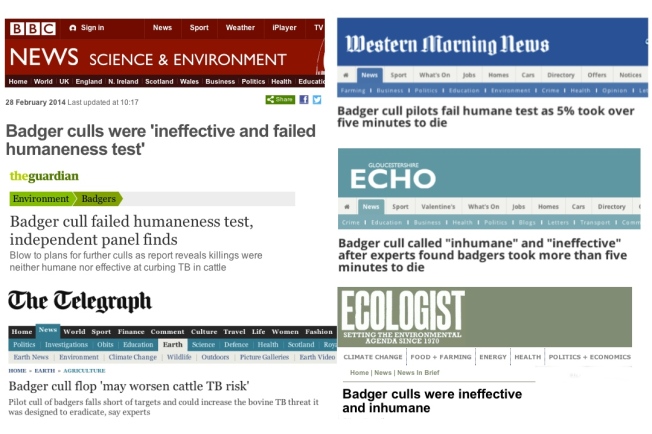 Following a leaked report from the Independent Panel of Experts (IEP) showing that trial badger culls in Gloucestershire and Somerset had been an abject failure, we are calling for the culls to be abandoned and released this statement:

It was clear months ago that the culls were failing to reach key targets set by the Coalition Government, despite repeated denials by the Environment Secretary Owen Paterson, DEFRA and the NFU. Now the Independent Panel of Experts set up by the Government to review the results of the culls have confirmed everything we have been saying.

The IEP concluded that the culls  fell far short of the target numbers of badgers killed, even after extending both culls beyond six weeks, yet Owen Paterson had hailed them as a success. Many leading scientists and wildlife experts believe the failure of the culls could actually worsen the spread of TB. The Panel also found that the culls were not humane. Owen Paterson, without waiting for the Panel to report, claimed months ago that they were. According to Natural England Compliance Monitors some badgers took five minutes or more to die in agony after being shot.

The scientific facts were manipulated to suit the policy. DEFRA has also now admitted that both badger populations and TB rates in cattle were grossly overstated. Badger numbers were falling, not ‘soaring out of control’, which is what the Environment Secretary claimed. The three rotten planks shoring up this ramshackle policy have therefore collapsed.

The cull policy has been shot full of more holes than the unfortunate badgers who needlessly died. It is clearly time to abandon this unjustified and unpopular slaughter and implement other measures which have been found effective elsewhere, such as in Wales where a programme of badger vaccination, tighter bio-security on farms and cattle movements has produced a far more positive result for farmers than the two culls in England did.

In Dorset farmers and land owners have a clear choice, either pay for costly, ineffective and enormously unpopular mass slaughter of badgers, or opt for much cheaper, scientifically proven and humane vaccination of badgers through the Dorset Badger Vaccination Project.